“Coral for Coal is a plea to change. The lyrics tie together our economic, social and humanitarian issues inspired by my travels. In particular there’s references to a documentary about the street children in Durban called "Angels in Exile", the Trump administration, floating islands of plastic waste in the Pacific Ocean and of course climate change. It’s not so much about pointing fingers as it is a plea to look for the changes we can make within ourselves, our attitudes and the little things we can do that add up to so much more.”

A little over three years ago John landed in NYC with a guitar called Grace, two hundred dollars and no smart phone. This situation led to him travelling and touring extensively through the USA, Canada, New Zealand, Australia, Asia and then home to Europe. Formerly playing with his band CAB Collective, as a newly founded solo artist John quickly accumulated fiercely loyal fans the world over and recorded his debut solo album“Chasing My Grace” at Neil Finn’sRoundhead Studios in Auckland.

Coral for Coal is the first single from his forthcoming EP “Time to Think”, recorded in collaboration with ARIA winning producer Adrian Breakspear (Gang Of Youths,CLEWS, Johnny Hunter). Utilising an intentionally raw and stripped back production, guitar work rooted in folk expressions and heartfelt lyrical content, this EP is set to build upon John's reputation as an engaging performer and master storyteller. 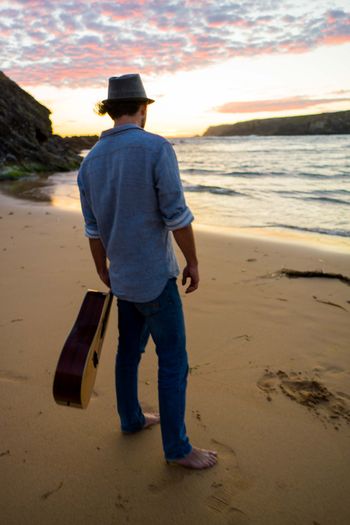